We receive several calls from employers and individuals Nationwide seeking advice on what is a DOT refusal to test?   A DOT refusal to test could mean several different things and we recommend you refer to your company’s drug free workplace policy or 49 cfr part 40 to review these specific requirements. This blog will outline the most common scenarios discussed in CFR 40.191 sub part l – Problems in Drug Tests.

It is our hope that this summary will assist you in understanding what is a refusal to test as it relates to a DOT Drug or alcohol test and if so what are the consequences of the refusal. We will attempt to outline major talking points in this summary, but we recommend familiarizing yourself with part 40 in its entirety. (Click here to download 49 CFR Part 40)

What is a DOT refusal to test and what are the consequences?

Employees play a major role in a refusal to test scenario. Employers, individuals, collection sites, collectors and DER’s should be aware of the common issues which could be considered a refusal to test. The specific refusal scenarios listed in 49 CFR part 40 cover the collection process and some refusals and some refusals are easily identifiable while others require more verification.

If employee(s) find themselves in any of the scenarios below, it could be a refusal to test under CFR 49 Part 40.

(1) if an employee fails to appear for any test (random, reasonable suspicion, post-accident, return to duty or follow up) within a reasonable time, as determined by the employer, consistent with applicable DOT agency regulations, after being directed to do so by the employer. This rule would also apply to an employee (including an owner-operator) to appear for a test when called by a C/TPA (see §40.61(a)); One exception applies to a pre-employment drug screening which does not fall under this section of the regulation.

(3) Employee fails to provide a urine specimen for any drug test required by this part or DOT agency regulations. If an employee leaves the testing/collection site before the testing process begins (see §40.63) and only as it relates to a pre-employment test is not deemed to have refused to test.

(4) If the employee is required to have a directly observed or monitored collection in a drug test and does not allow or permit the observation or monitoring of the specimen being provided.

(5) an employee fails to provide a sufficient amount of urine when directed (45mL) and it has been determined, through a required medical evaluation that there was no adequate medical explanation for the failure.

(6) employee fails or declines to take an additional drug test the that employer or collector has directed you to take.

(7) Fail to undergo a medical examination or evaluation, as directed by the MRO as part of the verification process, or as directed by the DER under §40.193(d). In the case of a pre-employment drug test, the employee is deemed to have refused to test on this basis only if the pre-employment test is conducted following a contingent offer of employment. If there was no contingent offer of employment, the MRO will cancel the test; or

(8) Fail to cooperate with any part of the testing process (e.g., refuse to empty pockets when directed by the collector, behave in a confrontational way that disrupts the collection process, fail to wash hands after being directed to do so by the collector).

(9) For an observed collection, fail to follow the observer’s instructions to raise your clothing above the waist, lower clothing and underpants, and to turn around to permit the observer to determine if you have any type of prosthetic or other device that could be used to interfere with the collection process.

(10) Possess or wear a prosthetic or other device that could be used to interfere with the collection process. (an employee leaves the testing/collection site before the testing process begins (see §40.63) and only as it relates to a pre-employment test is not deemed to have refused to test.

(11) Admit to the collector or MRO that you adulterated or substituted the specimen.

How does a DOT refusal to test affect me?

Refusing to submit to a DOT drug or alcohol test is typically equivalent to a positive DOT drug or alcohol test. Designated employer representatives must ensure that they immediately remove the particular employee from performing any safety-sensitive functions (i.e., driving CMVs), refer the employee to a qualified Substance Abuse Professional and may not return into the safety sensitive function until successful completion of the return-to-duty process with a DOT-qualified substance abuse professional.

What is the Designated Employer Representative (DER) role in a DOT refusal to test?

Who can determine a refusal to test for a DOT drug or alcohol test? 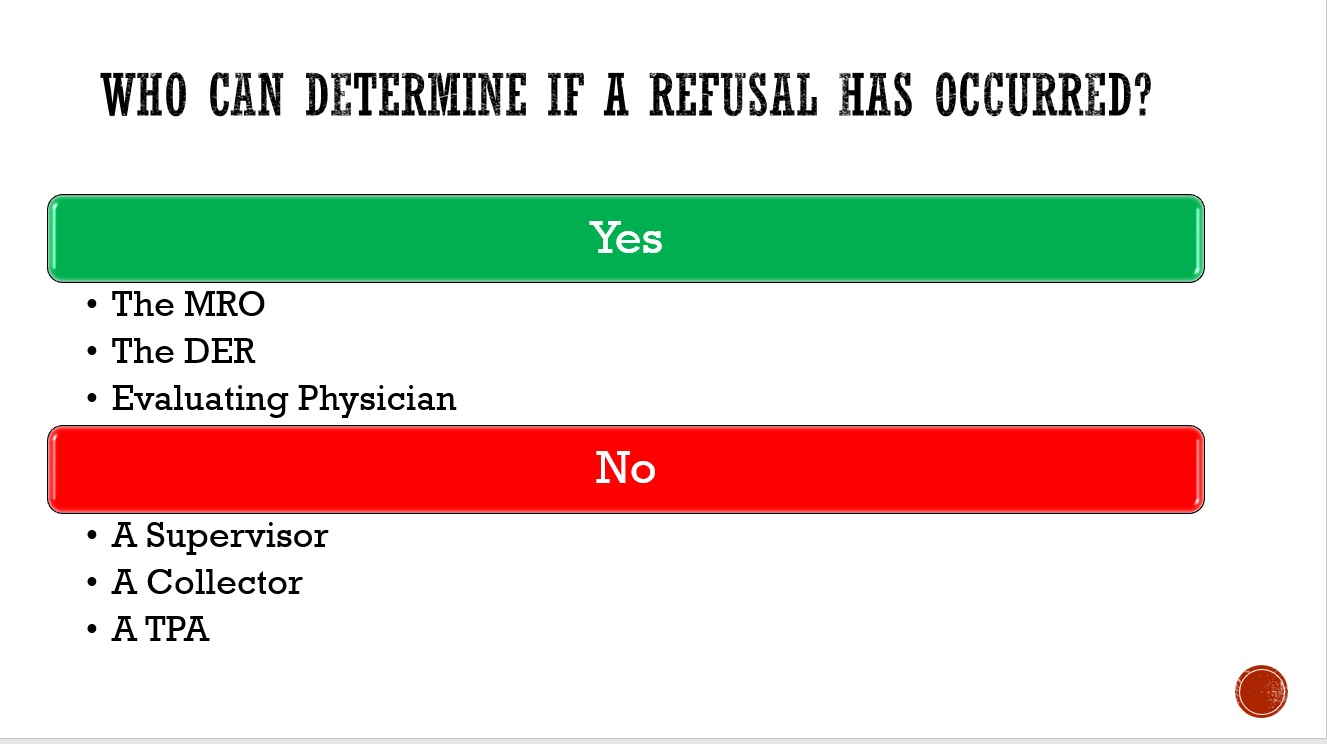 For more information on the DOT drug testing process call us today 800-977-8664 or click here to send us a message!